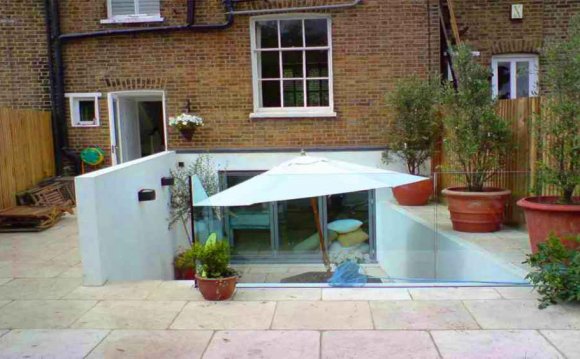 Take the house that developer Alan Waxman, of Landmass (landmass.co.uk) is building in Notting Hill. From the outside, it looks like a modest, square-shaped two-and-a-half storey property. Inside, however, you find not just one basement level, but two.

He has lowered the back garden so that it stands at upper basement level, accessible through the open-plan kitchen. Meanwhile, in the lower basement, there is a gymnasium plus a bedroom, and up at ground level, a garage.

And it’s not just under the house itself that basements are being built. Literary agent Ali Gunn has a 33-foot subterranean reception room stretching out underneath almost the entire length of her back garden.

Add the stand-alone studio at the end of the garden, and you’ve got a property that looks like a standard house, but which, thanks to its large amount of extra accommodation, is on the market for £4.5m (savills.co.uk and farrar.co.uk).

No question about it, a basement adds value, as well as space. “On standard four-bedroom period homes, basement conversions can increase value by around 15 per cent, ” says Charlie Bubear, head of Savills Chelsea.

“If you are able to maximise the light, they can make fabulous kitchens or family rooms, and become the heart of the home. If light is restricted, then consider a gym, cinema room or laundry room.”

In recent years, the basement craze has started to move out of London, to Cambridge, Manchester and Edinburgh. Any area, in fact, where costs per square foot for installation are outweighed by the amount that buyers are prepared to pay.

But it’s still in the capital where the biggest profits are to be made. If you have £38m to splash out, for example, there’s a luxurious basement pool waiting for you in The Bishops Avenue, north London (Glentree, glentree.co.uk).

It should be said, though, that opinions are divided as to whether or not a pool will increase the price of a house.

“Cinema rooms, playrooms, gyms and additional storage all help to add value, ” says Tom Tangney of Knight Frank’s Kensington office. “Swimming pools not so much. It is best to speak to an estate agent before embarking on such a project.”