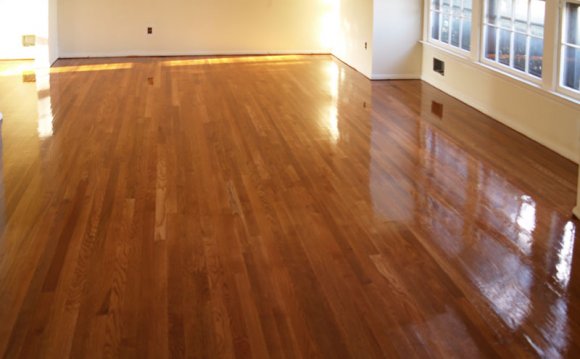 For Glue-Coated Shims:
1. Tap a wood shim into the gap above the floor joist after smearing the shim with carpenter's glue.

When you can't get access to the floor joists from below, your only choice is to make the repairs from above. The trick, however, is to silence the squeaks without damaging the finished floor. Fortunately, there are two fastening systems, both manufactured by O'Berry Enterprises, that can do just that. Carpeting. The Squeeeeek-No-More Kit (about $30) can be used on carpeting laid over a wood subfloor. The kit consists of a screwdriver bit, pilot screw to help you locate joists, depth-control fixture and 50 specially designed breakaway screws. First, locate the joist nearest the squeak. Stand the depth-control fixture on the carpet directly over the joist. After wrapping transparent tape around one of the screws to prevent it from catching on the carpet strands, drive it through the fixture. Remove the fixture, tip it sideways and insert the screwhead into the slot in the top of the fixture. Rock the fixture side to side until the screwhead snaps off below the surface of the subfloor. Creaks under carpet 1. Set the three-legged depth-control fixture over a joist, then drive in one of the special Squeeeeek-No-More screws. Be sure to wrap the screw with the transparent tape provided so it doesn't snag the carpet fibers. 2. The depth-control fixture doubles as a snap-off tool. Insert the screwhead into the slot, then rock the fixture back and forth until the screw breaks off below the surface. Hardwood. The Counter-Snap Kit ($8) provides an effective, nearly undetectable way to stop squeaks in hardwood floors. The kit comes with a screwdriver bit, depth-control fixture and 25 breakaway screws. But, unlike the Squeeeeek-No-More system, the screwhead automatically snaps off when you drive the screw into the depth-control fixture. Start by boring a 3/32-in.-dia. pilot hole through the floorboard nearest the squeak. Next, put a screw through the depth-control fixture and into the pilot hole. Drive in the screw until it snaps off below the surface of the wood. To conceal the screw, fill the pilot hole with wood putty. It may not be possible to silence every squeak in your home, but with the techniques described here, you can certainly cut down the chatter to an occasional chirp. Hardwood floor 1. After locating the squeak, bore a 3/32-in.-dia. pilot hole through the hardwood flooring; it isn't necessary to hit a joist below. 2. Set the Counter-Snap's depth-control fixture over the pilot hole. Drive the screw down until it bottoms out and automatically snaps off. 3. Fill the pilot hole with tinted wood putty. Allow it to dry, then lightly sand the spot. You can also use a crayon-type putty stick.