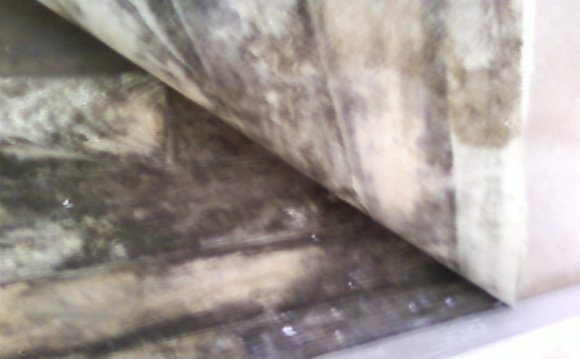 You have probably heard of the expression “Rising Damp”. Some of you may even remember Leonard Rossiter in the TV Sitcom? Here however, I am referring to that phenomenon of damp staining and failed plaster at low level, seen mainly on the external walls of properties built before 1900.

But what is rising damp? And does it actually exist? Now even to ask that latter question is controversial as there is a whole industry out there making its living providing reports and carrying out “remedial works” to cure rising damp and even offering 20 to 30 year guarantees.

Rising damp is the name given to dampness manifesting itself in the lower parts of external walls. Tide marks may be present internally and sometimes “salts” are visable on the internal plasterwork which causes damage to the extent that the plasterwork fails.

In the later part of the 20th Century, the generally accepted treatment was to inject silicone into the walls and hack off all the plaster up to 1 – 1½ metres and replaster with sand and cement render often incorporating a water proofer. This can cost anything from £5, 000 – £10, 000 for a three bedroom terrace or semi and causes lots of other consequential disturbance.

Is this necessary? Probably not and it was mainly the water proofer that held back the damp. Injecting silicone into bricks or their mortar is problematical. Injecting it into porous stonework, such as limestone or sandstone simply doesn’t work. Solid walls are not actually “solid” being usually two skins of stone with rubble infill and you can’t inject rubble infill.

The Society for the Protection of Ancient Buildings (SPAB) talk of “breathing buildings” and this is one of the mainstays of their philosophy of a period or listed building with no damp proof course.

Rising damp will only occur in a wall where there is no damp proof course (dpc). This is a layer of something that is impermeable to water, sometimes under pressure. Traditionally, from about the 1880’s onwards, slate was laid in two layers just above ground level. Sometimes it was two courses of very hard dense engineering brickwork. Later mastic asphalt was used and later still lead cored bitumen and latterly in the 20th century to the current day a variety of polymers. The other innovation was to incorporate open cavities but pre-1880’s these are not generally present.

So why are we concerned about Rising Damp? It usually comes to mind after you have put in an offer on a house and the building society or bank surveyor has said to get your mortgage you will need to “cure the rising damp” and then insists on you getting a “specialist” to report and undertake works.

So you have a solid walled house with damp walls why? Rising damp? It’s a possibility. However look first for other causes such as:-

* High ground levels, i.e. above the inner ground floor level. It is generally accepted that the outside ground level should be about 15cm below the inner floor level. However this is not always possible, especially when you don’t own the adjoining land.

* Another very common cause of dampness at low level is leaking gutters or overflows and the inherent splash back resulting from this. If you have thatch and no gutters then ensure that the ground is not hard paving around the building to reduce this splash back.

* Defective render, poor or inappropriate pointing, poor brickwork or stonework can also be a cause of internal damp.

* Depending on the internal pore size of the bricks or stones, liquid water may rise up through the individual bricks or stones mainly by capillary action. Once the water reaches the point where it can evaporate faster than it can rise up, it rises no further. In a traditionally built property, this transpiration is called “breathing” and is the natural result of no damp proof course in solid walls. All such walls will be slightly damp at low level. It is not a “fault” it is how they were built and how they work.

Action to take for rising damp

* If the property has not already been “modernised” with cement render internally then replace any defective plaster with a breathable lime based plaster and apply a vapour permeable paint.

Note: It is very important not to use modern acrylic vinyl emulsion or other vinyl paints and preferably no wallpaper.

* Deal with all the external housekeeping issues. If the house has cement based pointing consider removing and replacing it with lime based mortar. Be very careful to not damage the bricks or stones in the process and never ever use disk cutters or mechanical means.

* If it is really bad or you have high ground levels outside, then use a hydraulic lime plaster that breathes but doesn’t allow liquid water to come through.

Traditionally built properties are fundamentally different from modern buildings and require a holistic approach to the diagnosis of damp problems and their solutions. Initially, make sure you consult with a suitably qualified building surveyor to identify the cause of your damp issues and then employ a company experienced with the use of traditional materials to carry out remedial works.

Martin Hall is a conservation accredited Chartered Building Surveyor at Hall & Ensom in Oxfordshire. The practice covers the Cotswolds, Thames Valley and Southern England. He has over 30 years experience of surveying and the design & supervision of repairs and alteration works to a range of period and listed properties.

This is an article from ProjectBook which provides a wide range of information for the conservation, restoration, care and repair of period and listed buildings. Hall and Ensom are members of ProjectBook’s Heritage Register which contains over 500 vetted craftsmen, contractors and consultants from all over the UK. Updated daily with new content, the website features the Heritage Register, a products directory, informative articles, current news, events and more. For more information, visit www.projectbook.co.uk.