How to lay a DPC membrane? 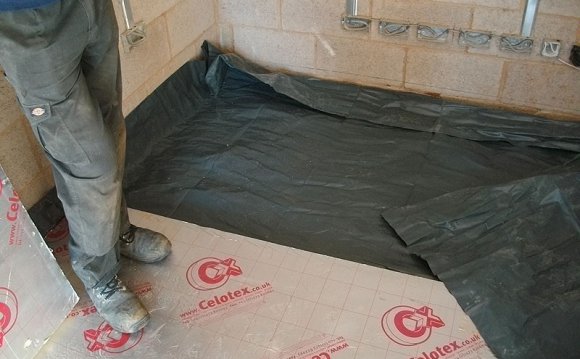 The central area of the site has previously been filled with broken brick hardcore from the old flank wall that was taken down, and this has been well compacted. This hardcore forms the sub base to our new concrete slab which is the next job on the list. With the outer brick walls up to damp, we’re now ready to build up the rest of the layers and cast the slab.

Sand is barrowed through from a pile stacked up on a tarpaulin on the front drive and poured over the base. This is then shovelled out to distribute it roughly before being levelled off. A string line between the walls acts as a guide to getting the levels right and a 100 x 50 mm timber batten is used to grade the sand level in sweeping motions. Any dips or hollows get topped up as they go along and the surface re-graded. It’s amazing how quickly this can be done – experience shows ! The final thickness of the sand blinding once it has been tamped down is around 50mm.

Next, the damp proof membrane is laid over the sand. When the area can be covered with one large sheet, there is no need for any joins. On larger areas however, as one of the team from G L Smith explains, joins are lapped by at least 150mm and sealed so that the end result is still a continuous membrane. This membrane prevents any moisture being able to rise up through the concrete slab. The edges of the DPM are lapped over the brick walls so that it will tie in with the damp proof course as the walls are built up later. For now it’s held in place with a few bricks to stop it blowing around.

Concrete ground floor slabs have a lot more insulation nowadays compared to how things were in the past. On this job they use 100mm Xtratherm sheets. This has a rigid foam core filled with tiny bubbles and is faced with foil. This provides a relatively high insulation value for its thickness and is straightforward to fit. The sheets are lightweight meaning they can be lifted and positioned easily. They are also readily cut so the whole process of insulating the ground floor slab takes very little time.

The area of the slab means that calling in a delivery of ready-mix wouldn’t make much sense so the concrete is mixed on site. There’s a large pile of premixed ballast sitting on a tarpaulin on the drive and plenty of bags of cement alongside that. The mixing process starts and before long, the mixed concrete is being barrowed round to the slab area. As the barrows are emptied, the concrete is shovelled out and roughly levelled to form a base which around half the final thickness. The reason only half the thickness is laid to start with soon becomes apparent. Large sheets of steel reinforcement are laid over the concrete before the final thickness of concrete is built up. The steel mesh makes the concrete slab far stronger than it would otherwise be.

With the slab completed, the concrete mixer gets a thorough clean along with the rest of the tools. I’m sure you can tell a lot about builders by the state of their equipment. If you’ve ever seen a beaten up old concrete mixer with dents and knocks in it you can be fairly sure someone forgot to clean it and had quite a job getting the hardened concrete out. There’s nothing left of the pile of ballast on the drive now, and suddenly there’s a bit more space for materials. But, not for long I suspect !

If you have bought a new car abroad, rather than trying to drive yourself back to where you live, consider using the services of a professional vehicle transport company: not only will this guarantee the security of your car and save lots of your precious time, but it will keep its mileage at zero, which may turn out useful if you decide to sell it in the future.