Build your Own Underground root cellar 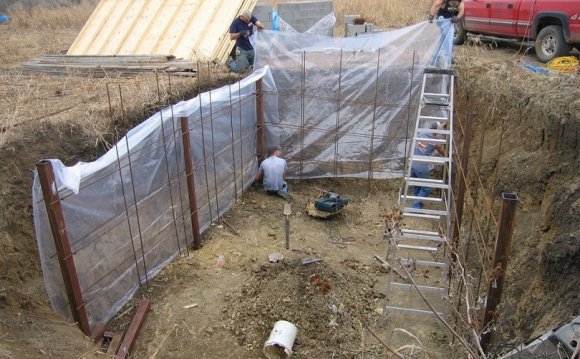 Now that the growing season is in full force, most of us are — once again — faced with the problem of just what to do with the mountains of vegetables our gardens keep producing. Of course, one of the best places to store the "keeper crops" is a root cellar (one that's freeze proof, watertight, and able to maintain a cool year-round temperature). And — of course, again — most folks figure that in order to create an earthy vegetable bin, you generally need a hefty hillside to carve the "cave" out of...and a ready supply of cash to pay for building materials.

But suppose — like me — you're a flatland homesteader who's got barely enough money on hand to cover the bills. Does that mean you can't have a root cellar? Nope, because if you do what I did, you can easily create your own durable underground vegetable storer — for less than $200 — even if your farmstead hasn't got a rise higher'n a gopher's mound! Read on to learn how to build a root cellar affordably and easily.

I live in the Comanche Basin north of Billings, Montana, where the land is as flat as a pancake and as devoid of natural building materials as it is of hills. Still, I was determined to be as self-sufficient a farmer as I could be, which meant that somehow I had to construct a root cellar.

Unfortunately, no brilliant ideas for how to do this readily volunteered themselves. But one day I happened to notice a local construction company lowering a precast concrete box into a large hole in the ground ... and suddenly I knew how I could make a root cellar on my property!

Let me explain. You see, I'd recently developed my own piece of land for a house, so that concrete box put me in mind of the septic tank I'd just installed. Then I remembered that the place where I'd bought my waste holder had had several unused damaged tanks lying around. The defects, though, were confined mostly to cracks and small holes which rendered each hollow cement box permanently useless for holding liquids ... but that could, if filled, certainly make one sound enough for my purposes. If I could somehow lower a well-grouted tank into the ground, I'd have a ready-made root cellar!

I rushed right down to my friendly septic tank salesman with my idea. That fellow not only thought my plan would work, but he elaborated on it somewhat by suggesting that, instead of using one complete tank, I should try two expansion units and a tank cover, stacked on top of each other. That way, I'd end up with a roomy structure 10'6" deep, 4'6" wide, and 8'6" long ... which could be placed farther into the ground than a sole septic unit. Plus, the top section would come complete with a 24" X 24" concrete entry hatch and a plastic pipe (which would allow ventilation). The salesman said that the total cost for this root cellar "high rise", complete with delivery and setup, would be a mere $120. I was sold, and made arrangements to have everything brought to my property as soon as possible!

Naturally, I was now faced with the problem of excavating a hole for my food storer. I didn't have a backhoe—or feel like renting one for $50 an hour!—so I needed to devise an alternative system. Well, once again fate was on my side: There just happened to be a construction crew equipped with all manner of heavy equipment working on the property adjoining mine. So I walked right up to one of the machine operators to find out the "lay of the land".

I soon learned that he was a freelance equipment operator whose crew was pulling out that night. What's more, they were all a bit dismayed that the nearest town was so far away, because they were feeling a mite thirsty. Hearing this, I thought quickly — especially quickly, since he and his workers could carve out in 15 minutes what would take me well over a week of hand-digging—and offered him a case of beer in exchange for his making the hole for my new root cellar. You guessed it ... no more than 20 minutes later, the job was done!

Setting Up the Root Cellar

The following day, after the tank pieces were delivered and put together in the hole, I carefully grouted all the cracks (inside and out). That done, I painted the exterior underground portion of the concrete container with roofing cement, covered it with a layer of black polyethylene, and finished up by coating the plastic with another round of cement.

When the cellar walls were ready, the septic tank crew backfilled and leveled the ground for me (as part of our prearranged contract). To promote proper drainage, I had the cellar protrude 2 feet above the ground. That still left a good 8 feet in the earth, more than enough to keep the air cool within the tank. To polish off the project, I made a ladder, flooring, and shelves from rough lumber ... attached wire mesh over the vent ... and made a sump-a 2' X 2' X 4' hole filled with gravel-under the floor to drain any water that might leak into the cellar.