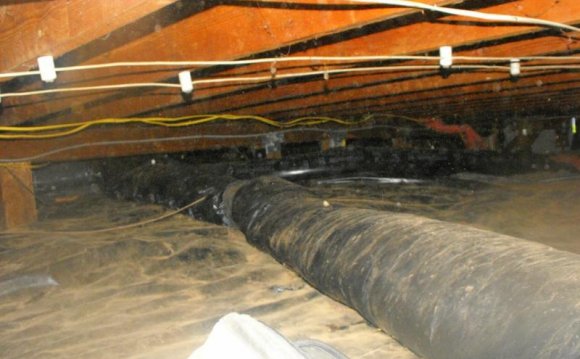 I've seen a lot of nasty crawl spaces. I've squirmed through their squalor and squeezed through their narrow confines. Possums, snakes, spiders, and camel crickets have kept me company in the dank, musty underworlds that so many people live above. Moldy joist fur (furry joist mold? joisty mold fur?) doesn't faze me. (That's not to say I haven't had nightmarish experiences.)

The world is NOT flat

Just as Christopher Columbus didn't sail off the edge of a flat Earth, home builders are now building houses on top of crawl spaces that aren't vented to the outside. Even better, they're occasionally putting really nice duct systems in there. Case in point, one of the homes I visited in Nashville, Tennessee last week.

Beautiful! Clean, white plastic to keep the moisture out and make the place seem brighter. A trunk-and-branch duct system that will actually move the air as it should. It has to because this house is getting air flow measurements and commissioning as part of the ENERGY STAR Version 3 certification. Of course, it had its flaws (a bypass duct for zoning, for example), but overall, this system was 8027.2% better than other duct systems.

Since the crawl space is air-sealed to the outside, the air down there is conditioned from the HVAC system. About halfway down the supply trunkline is this little supply vent blowing conditioned air into the crawl space. It felt wonderful when we entered on that hot, muggy afternoon last week!

Release the Kraken! — The Ductopus Is Bad for Air Conditioning

† I just made this number up, in case you're wondering. A lot of the numbers you see in articles on the Interwebs are made up or otherwise meaningless but the authors won't tell you that. In fact, I read a study that said 81% of all statistics are made up.