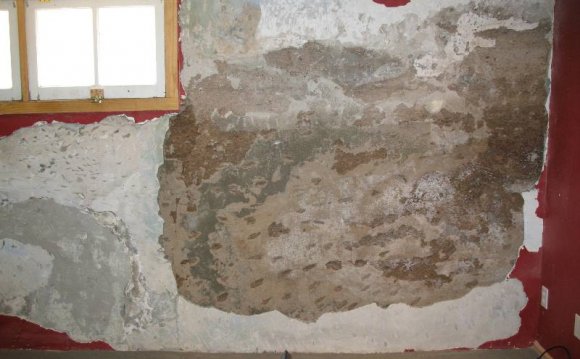 Q: Our 1920s Colonial has a stone foundation with some sort of cement coating on the interior. Much of the coating has flaked off, exposing the mortar joints, which are disintegrating.

We recently had a sump pump and French drain installed in the basement, which will eliminate much of the dampness from minor water leaks.

What would be the best process to re-coat the interior walls of the foundation?

A: To answer the question I return to the basement of another of my houses, which had a stone foundation and something that perpetually flaked off the walls.

When the builders of houses in the late 19th and early 20th centuries wanted to do something cost-effective with the clay soil excavated from digging a home's foundation, they had the workers mix it with lime and used it to plaster the inside basement walls.

These construction materials must have begun turning to reddish powder in a matter of years, and gathering on the edges of the inside walls.

In the mid-1990s, I helped a church's youth group that spent several months of the year preparing to work on the Pine Ridge Reservation in South Dakota.

To gain experience, we rehabbed houses with soon-to-be homeowners for Habitat for Humanity, and every house we worked on had these crumbling basement walls. That's when the Habitat people introduced some of the teenagers to pargeting.

Pargeting comes from a French word meaning "to coat a surface with plaster." The technique is easily learned.

What we were told was that the soil-lime interior coating had been designed to be replaceable, since its purpose was to shift when the exterior stone expanded and contracted during normal freeze-and-thaw cycles.

No one bothered to pass on the information to subsequent generations of owners, and these interior walls started to flake off.

This isn't a flaw; this is the way the coating was designed. To fix, our instructors told us:

Check the pointing on the stone on the exterior wall. If it is loose or missing, it needs to be replaced because moisture will cause havoc with the interior walls.

The interior walls should first be cleaned with a wire brush to get all the loose material off so that the new coating will adhere to it.

Then, mix one part Portland cement, three-quarters part limestone, and an amount of sand no less than 2.5 times and no more than four times greater than the amount of cement. (For 10 pounds of cement, that works out to 7.5 pounds of limestone and 25 to 40 pounds of sand.) Add water until the mixture is the consistency of pancake batter.

Wet the surface of the wall, and spread the mixture on — not too thick — with a trowel. If it doesn't bond to the surface, there could be too much water.

Never mix more than you can use in 30 minutes.

Q: I bought a snow-thrower in September 2011. With just four inches of snow last winter, I never put gas in it. I have yet to put gas in it again this year and have not even tried to start it. It has an electric start.

If I don't use it again this year, should I leave it alone and assume it will start when I finally use it, or should I add gas for the first time and at least run it for a few minutes? Will the oil in it be OK just sitting for two years?

A: I bought one in 1997, didn't put gas in it for three years, and when snow did fall and I finally put gas in it, it started just fine.