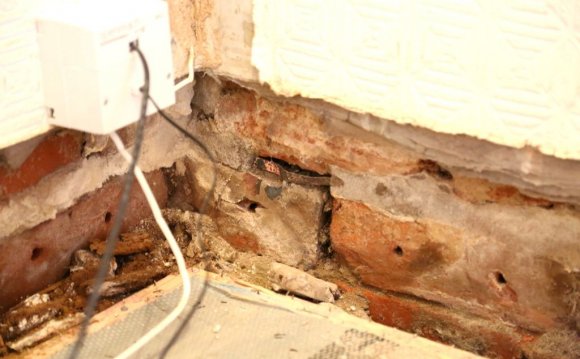 Most people will understand that lime mortar is more permeable than cement mortar, allowing moisture to evaporate. But research by English Heritage on stone church buildings has revealed another explanation for dampness penetration following cement re-pointing.

Rainwater percolating through older masonry walls seems to follow well-defined paths, eventually dripping out through the mortar joints. Cement pointing dams these escape routes, so that the only way out for the water is through the faces of the bricks themselves (which can lead to efflorescence spalling and frost damage) or inwards to the interior of the wall.

Much research has been published on this subject, but it has largely escaped the attention of Britain’s jobbing builders, who continue to rake out lovely old lime mortar and replace it with damaging cement-and-sand.Sadly, the jobbing builders’ response to the resultant dampness penetration problem is usually to apply another modern material

on top: a water-repellant chemical coating. This might or might not have a short-term waterproofing effect, but it might also make matters worse by further reducing the wall’s ability to dry out by evaporation. If it does have any positive effect, this is likely to be short-lived as the coating needs to be applied every two years.

Rather than throwing good money after bad with silicone coating or cladding, you might consider having the cement mortar raked out and replaced with lime mortar to matchthe original.

Q: Having recently purchased a house built in 1987, should we be concerned that there are no overflow pipes on the outside? The two tanks in the loft have pipes that seem to disappear under the eaves. The previous owner did not have a clue but thought the family bathroom lavatory was changed when it was refurbished, and the overflow goes down the lavatory. There is nothing visible in the en suite. Fortunately, the downstairs lavatory has a pipe that runs into the garage. Our full Building Survey report does not mention the overflow pipes (or lack of them) at all.

: If you are paying for your water through a meter then yes, you probably should be concerned. Overflow pipes from tanks and cisterns were originally called “warning pipes”, and emerged prominently through outside walls. The sight or sound of water splashing onto the ground below would alert the occupants to the water being wasted, so that remedial measures could quickly be taken.

The reversal of this simple and effective system seems to have started in 1999, when British water regulations were changed to allow the introduction of American-style WC flush valves with internal overflows. Since then the plumbing industry has become increasingly lax about the situation, and as Building Control has now been privatised, local authority Building Control Officers no longer make routine checks on such matters. It is now common for cold-water cisterns and central heating f&e tanks to overflow into gutters (as in your case), and for WC cistern overflows to be jointed directly into bathroom waste pipes. As a result, the first indication that many people get of an overflow problem is when they get an unexpectedly large metered water bill.

Do you know that the safety of your home depends largely on the reliability of the garage door? That's true, but many homeowners well fortify the front door forgetting about the door to the garage! Don't be like them, install the most secure garage door right now! Just contact Triple B Garage Doors and Gates, these are the best specialists in the garage door installation mesa, Arizona. Choose the design and the material that suits you. Experts will visit your home and they'll be happy to give you any professional advice. Don't hesitate to visit Triple B!