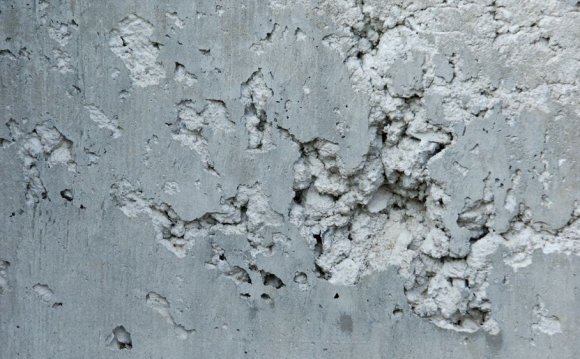 All natural systems tend towards equilibrium. A hot cup of coffee transfers heat to the air in the room until they are both at the same temperature (this is related to entropy and the second law of thermodynamics). In chemistry, higher concentrations of a chemical move towards areas of lower concentration (known as Le Chatelier's principle). The same is true for areas of higher or lower relative humidity (which is actually a measure of the vapor pressure of water vapor in air). This movement of vapor is called diffusion.

Whitening of sealers is often caused by applying it to a wet surface. QC Construction Products in Madera, CA

So why is that a problem? Water vapor from the floor can make rooms more humid, which can be a concern with new tighter home construction. In extreme cases, when you started with wet concrete or when the ground beneath the slab is very wet, the floor can actually be damp and slick and moisture will condense beneath objects placed on the slab. Wet floors can also promote mold growth.

For decorative concrete there are three potential problems with a lot of moisture coming out of slabs. First, if you stain a slab that has lots of moisture movement, especially stains that use copper salts, you can get blackening or discoloration. Second, as water vapor moves through the slab, it can condense into liquid water and leach calcium hydroxide which then ends up as efflorescence on the slab surface. This can also result in high pH levels at the slab surface.

But the biggest problem for decorative concrete with a lot of moisture moving through a slab is the pressure it exerts at the surface. If there is too much moisture in the concrete, and an impermeable layer is placed over it the moisture migration can delaminate the coating (sealer) or overlay. Sealers that allow some vapor passage can be used, but most topical membrane sealers require a moisture vapor emission rate (MVER) of 3 or 5 pounds/1000 square feet/24 hours.

In commercial applications, when carpet, wood, or vinyl flooring is installed over damp concrete, moisture creates real havoc, since the dampness and high alkalinity will lead to mold, emulsified adhesives, and warped flooring. This very expensive problem has led to a lot of research in recent years, and the simple answers that have emerged are to use a low water-cement ratio concrete (0.5 or less) and to install a vapor barrier under slabs on ground.