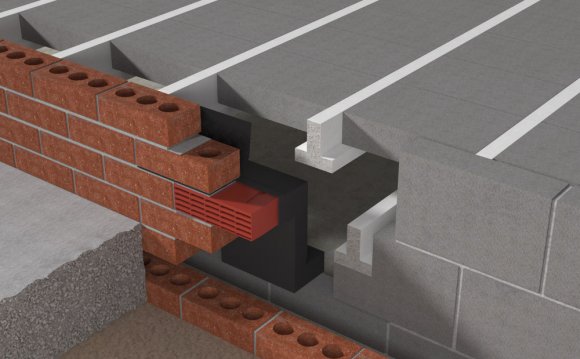 Airbricks, sometimes called air bricks or air vents, are special bricks containing holes that allow air to enter under the floor of buildings that have suspended floors. Cavity walls also need ventilation to allow airflow that will prevent moisture build up.

Traditionally airbricks were made of clay - a material similar to that used to manufacture bricks; later they were made from cast iron and now airbricks are made from plastic.

By having air circulating through airbricks into the cavity beneath floorboards cold or damp air does not remain in these spaces and the timbers used in joists and floorboards do not become damp and rot. In addition, the airflow created by installing airbricks provides ventilation for solid fuel fires and stoves and gas heaters.

It is important that the holes in airbricks are not deliberately blocked or allowed to be blocked by leaves or soil. It is not unknown for people to block airbricks because they cause a draught to come up through gaps in the floorboards! Adding a conservatory to one wall of a house can result in airbricks on this wall to be blocked by the concrete slab on which the conservatory is built.

If you baulk at the thought of using mouse traps, poison or glue traps there is a much more humane alternative that will stop mice from entering your home through airbricks: cover the airbrick with wire mesh - do not use plastic mesh since mice will chew through it.

You can buy fine metal mesh and fix it over all your airbricks; alternatively there are ready-made airbrick covers on the market that can be screwed or glued over airbricks.

These airbrick covers will also prevent slugs, wasps and beetles from entering your home via airbricks - but be sure to cover every airbrick, if you leave just one uncovered all manner of pests can still enter your home!

If you are building a new home you can choose to use airbricks with wire mesh covers already built into them so that there is no need to add airbrick covers as an after-thought.